In general, there are two kinds of promotions: implicit and explicit promotions.

The motivation for introducing promotion code groups is the wish to:

Each promotion is created as an implicit promotion at first. The promotion manager has to enable the promotional code handling in the Commerce Management application. The picture shows a promotion which is assigned to one promotion code group. 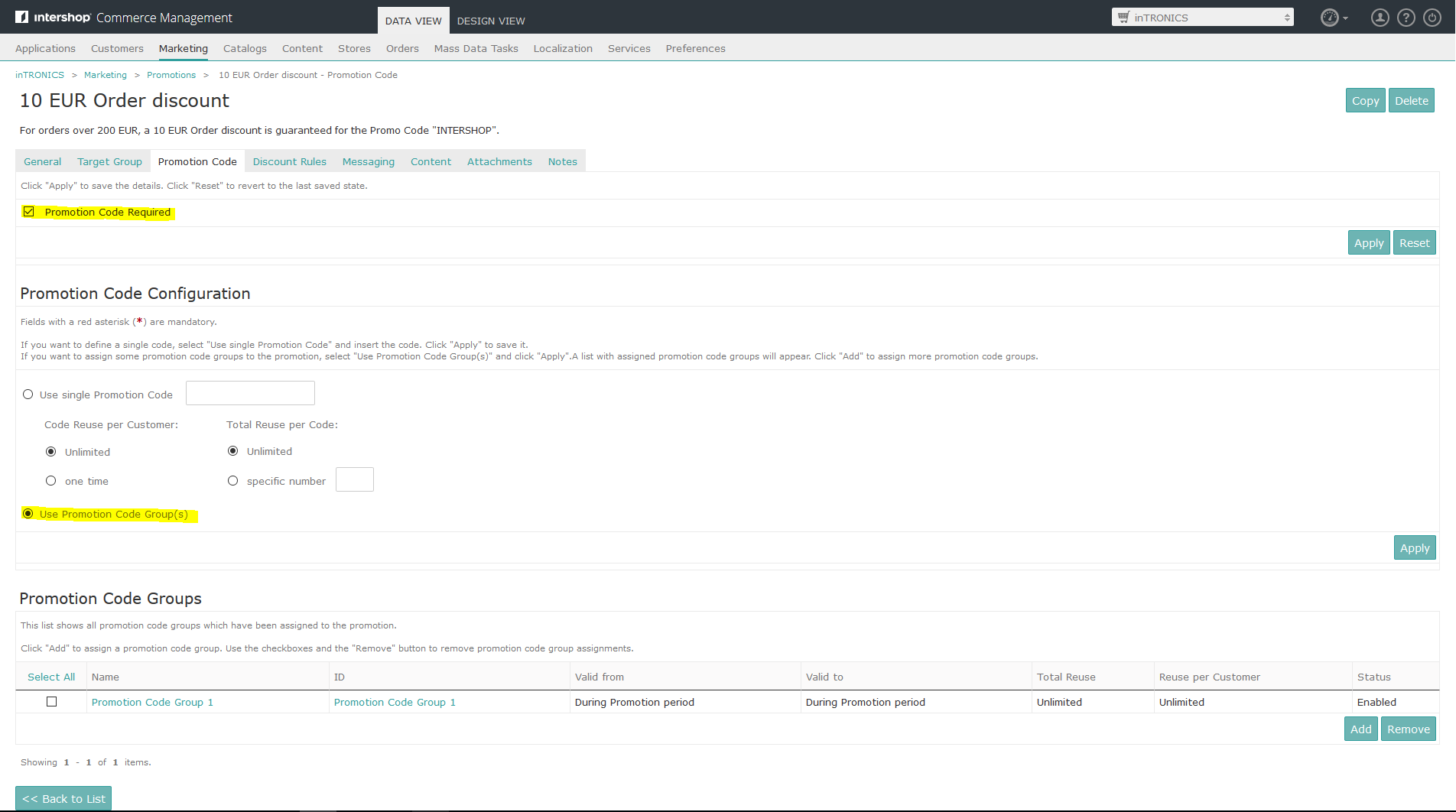 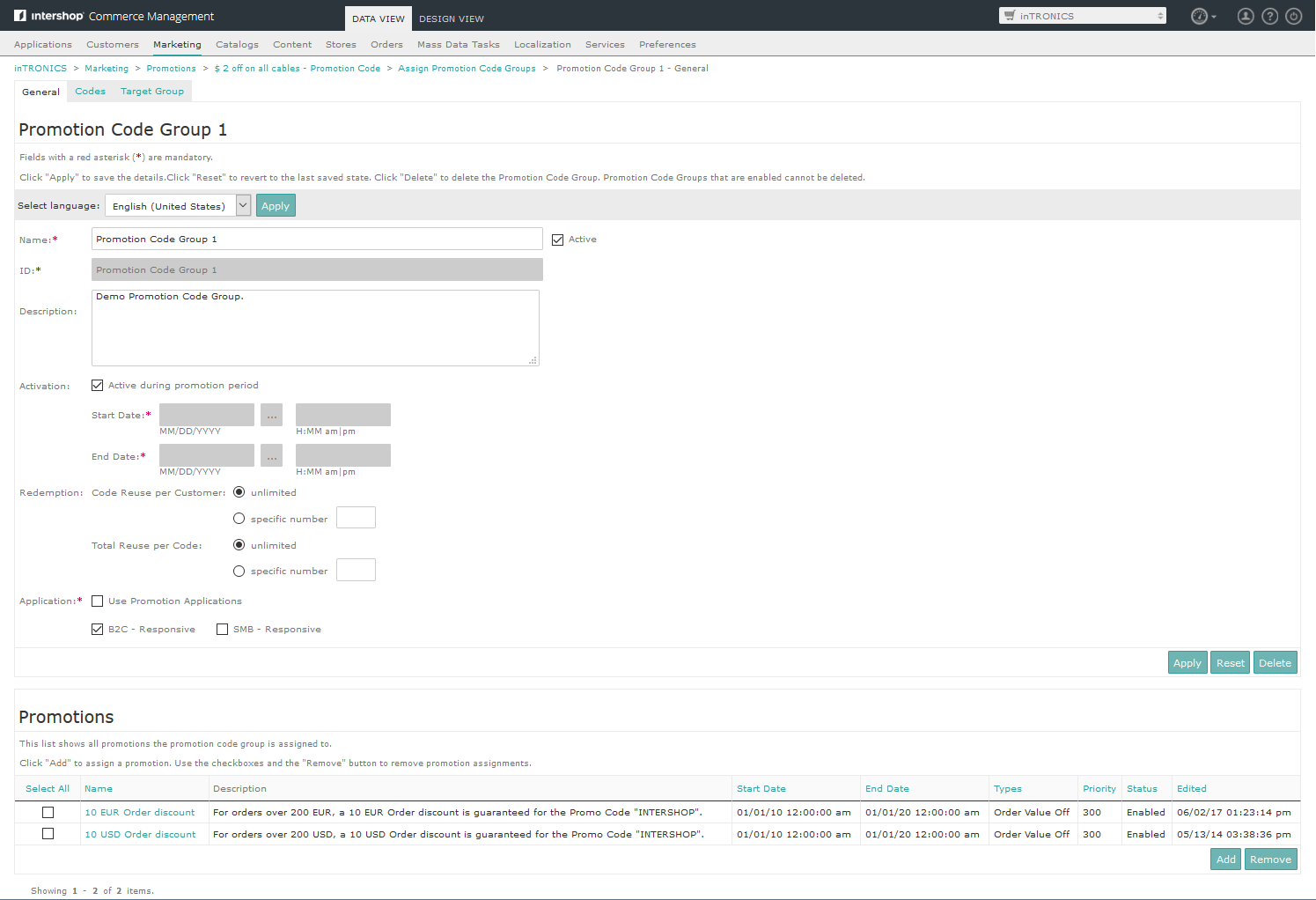 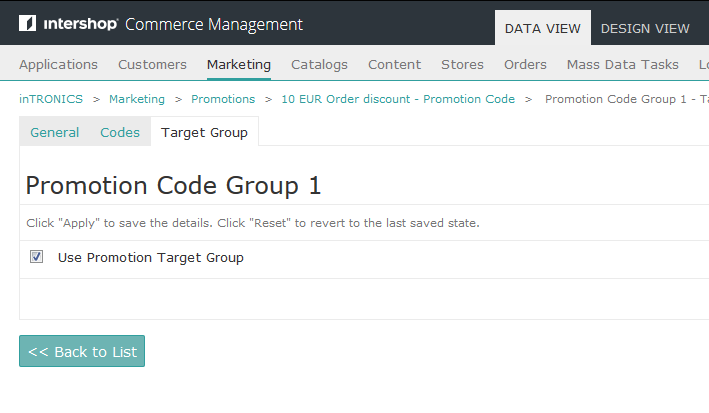 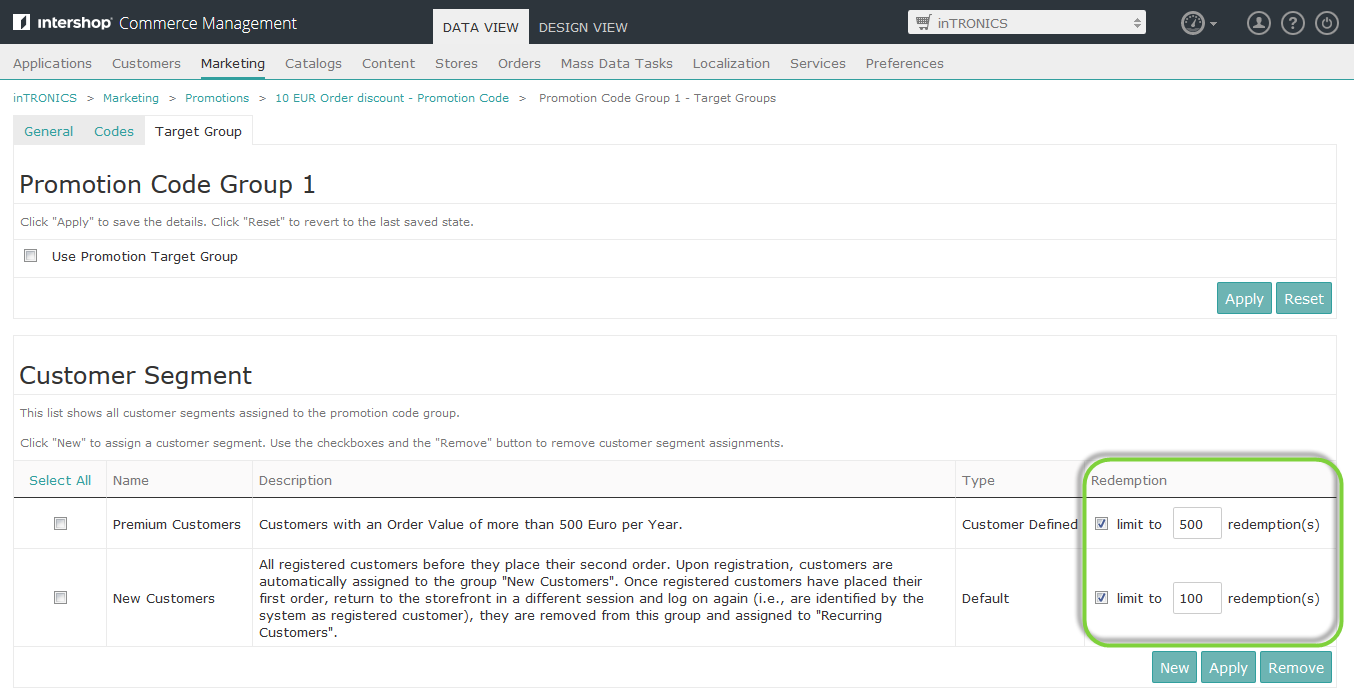 Pipelines for code handling are: ViewPromotionCodeList (sld_ch_base) and ProcessPromotionCode (bc_marketing).
The promotion code creation is done in pipelet: CreatePromotionCodes (bc_marketing ). It creates promotion codes for the given iterator of promotional code strings and commits them into the database. A commit level is set: a step size in order to save a such sized block of codes. 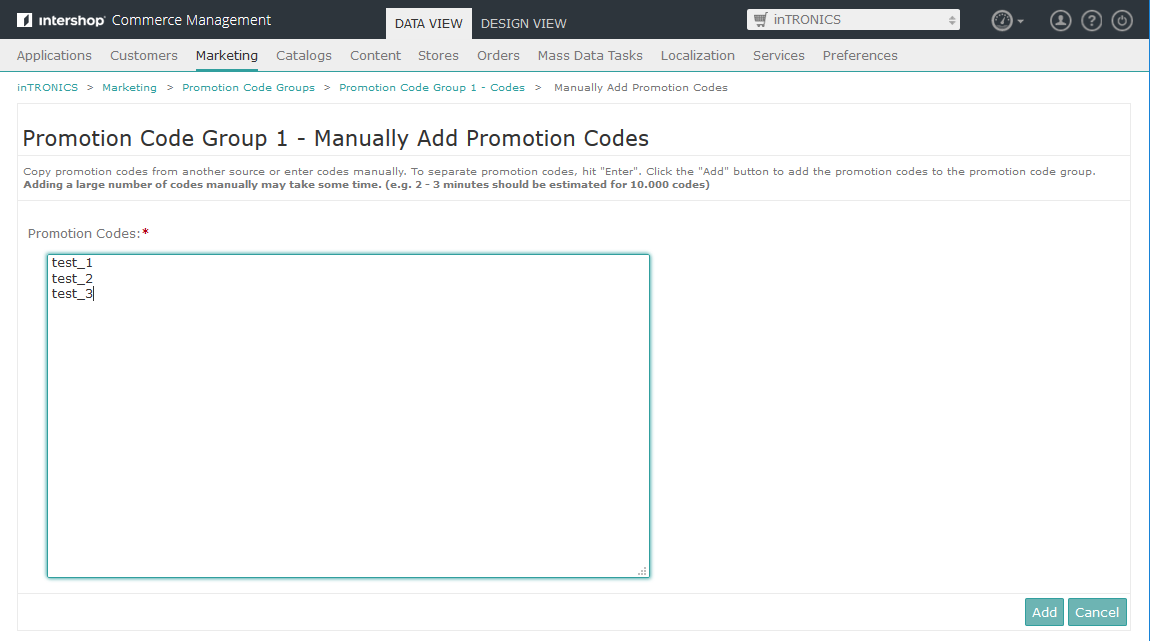 Since the prefix is part of the code, the specified code length must be larger than the number of characters in the prefix.

It is also possible to import promotion codes from a CSV file. The mapping template is PromotionCodeCSVConvert (bc _marketing).
The first line may contain some header information.

Furthermore it is possible to export promotion codes into a CSV format. Codes can be exported at once, or classified by their state: redeemed, not redeemed or deactivated. The export is executed by ProcessPromotionCodeExport (bc_marketing) as a batch job. Pipeline ViewPromotionCodeExport (sld_ch_base) prepares the export. 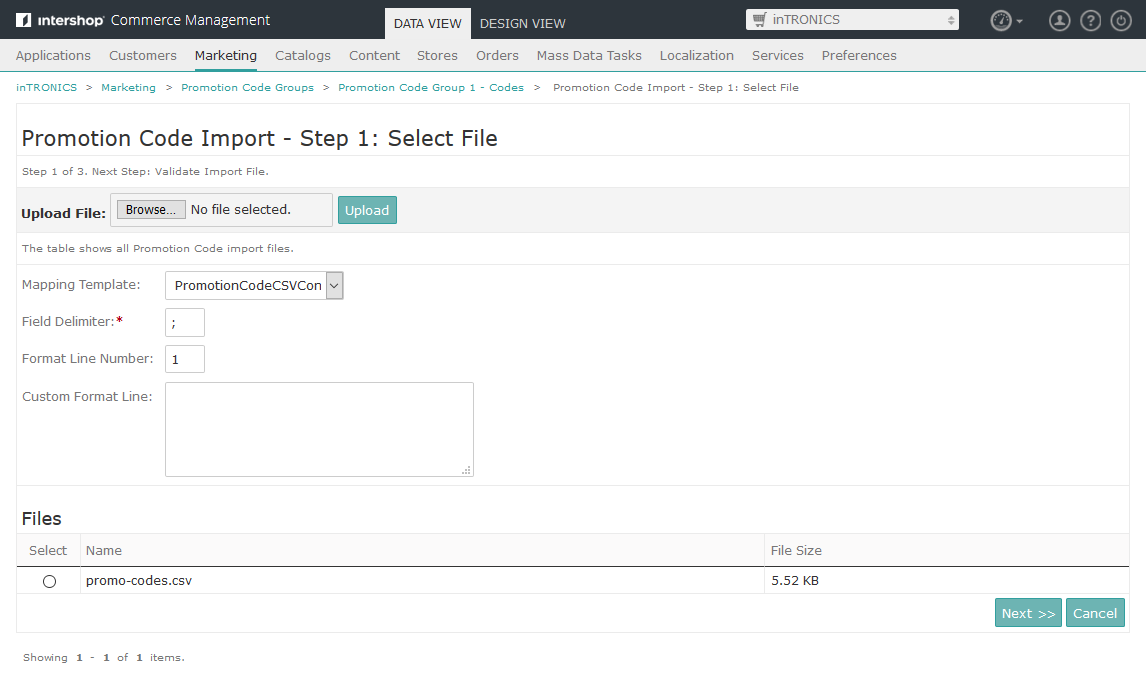 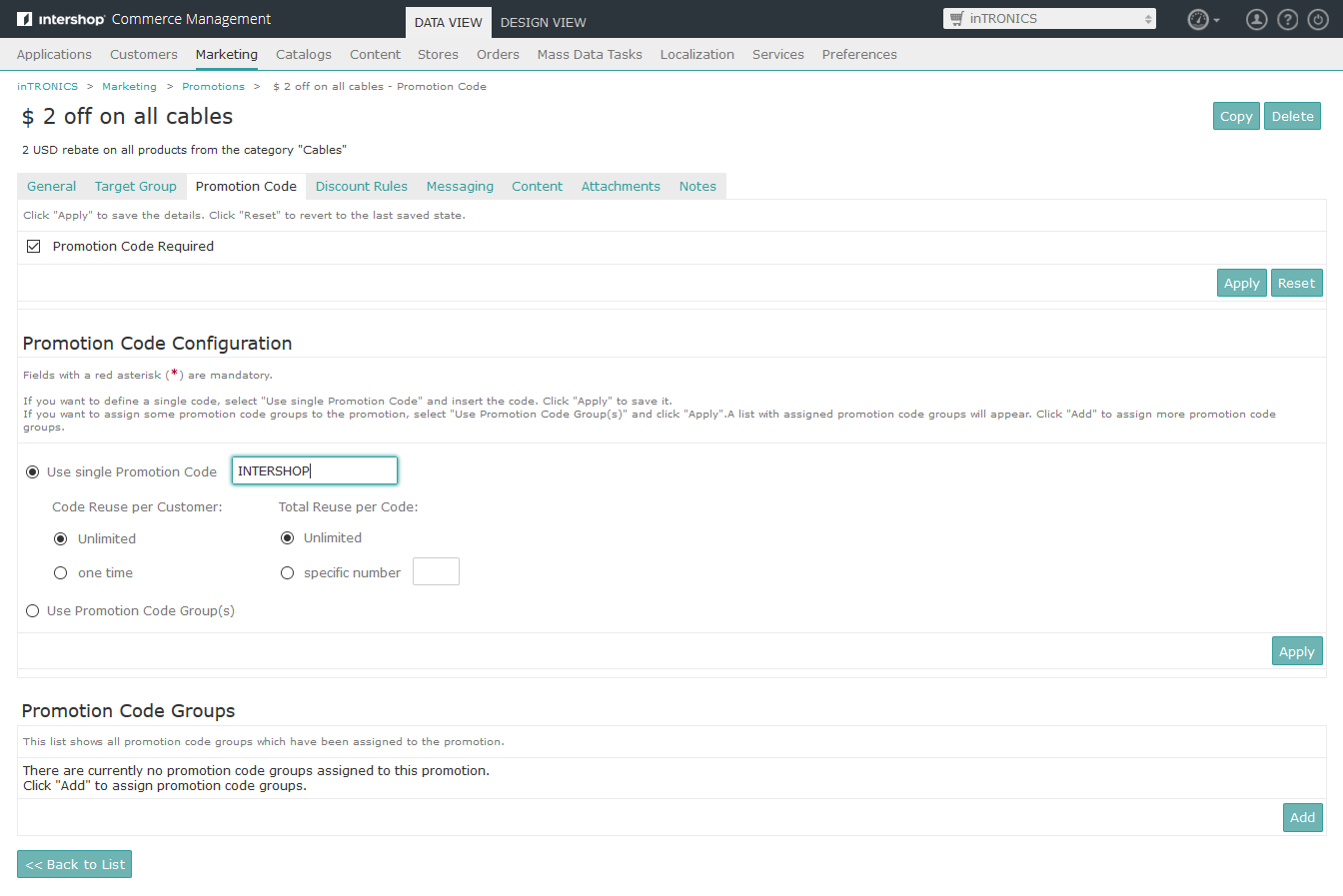 A customer can enter one or more codes for the order. As for the appliance of the code to the order the following criteria are checked:

Nonetheless Intershop recommends to restrict the promotion target groups for such use cases (configured number of code reuses per customer) to Registered Users..

Starting from ICM version 7.9 the logic is implemented in BO Extensions.

To add a promotion code to the basket and further checks and functionality around the basket, use the BasketBOPromotionCodeExtension.

To redeem a promotion code - count redemptions, remove reservation etc. - after the order has been created, use OrderBOPromotionCodeExtension.

The reserving period of promotion codes in minutes can be set in the application settings promotion tab. The default value is 1,440 minutes which represents one day. This period usually covers the time from applying the promotion code until submitting the order in B2C scenarios.

For B2B this might be quite different, when an approval process is configured. In such a case the time frame from applying the promotion code until the order is successfully created may be much longer because multiple persons might have to approve the order first.
To be sure that the reservation of a promotion code will not expire before an order is approved by all required people, the reserving period should be at least as high as the longest response time that is tolerable for approvals, e.g., one week. 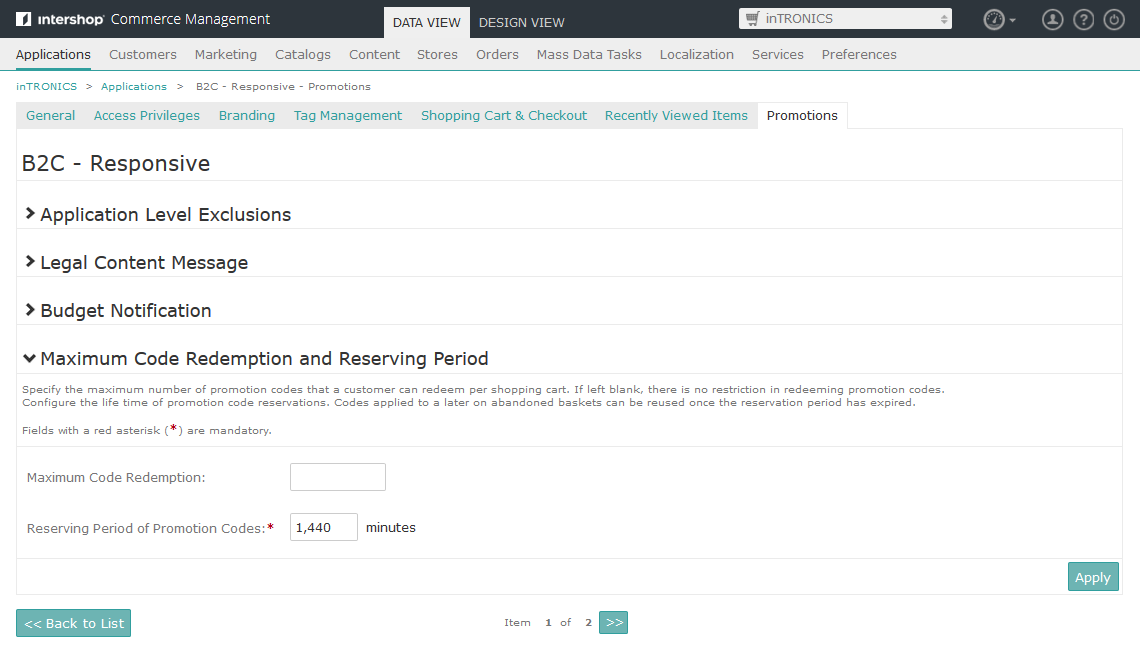 For Single Codes, which are stored at the promotion, the reservations will be stored in the table PROMOTIONBASKETRESERVATION. BASKETUUID together with PROMOTIONUUID are used as primary key. Additionally, each entry contains the USERID, the CREATIONDATE and the EXPIRATIONDATE.

Promotion codes based on Promotion Code Groups are stored in a separate database table. That is why the reservations will also be stored in a different table called PROMOTIONCODEBASKETRESERVATION. BASKETUUID together with PROMOTIONCODEUUID are used as primary key.  Additionally, each entry contains the USERID, the CREATIONDATE and the EXPIRATIONDATE.

The expiration date is calculated and stored during the creation of the reservation to ensure that a reservation automatically expires without any actions.

The reserving period of promotion codes will be configurable in the Commerce Management application.

If the reservation of a promotion code is expired, then the code can be redeemed by other customers.

Expired reservations for no more open baskets will be cleaned by a job automatically.

In addition, some business logic to maintain promotion codes and groups exists.

Besides the persistent object layer mentioned above there is a business object layer which should be used to programmatically handle promotion code group related tasks.
Here is an overview of available objects and its methods: