Content sharing is of explicit nature, meaning that nodes and leafs do not implicitly have access to content objects that have been shared to their parents in the sharing path. E.g., (as depicted in the diagram below) although PrimeTech-MasterRepository is shared to PrimeTech- PrimeTechSpecials and PrimeTech-PrimeTechSpecials is shared to B2CWebShop-Repository, it does not automatically mean that content objects residing in the PrimeTech-MasterRepository are accessible to B2CWebShop. This can be enabled individually. 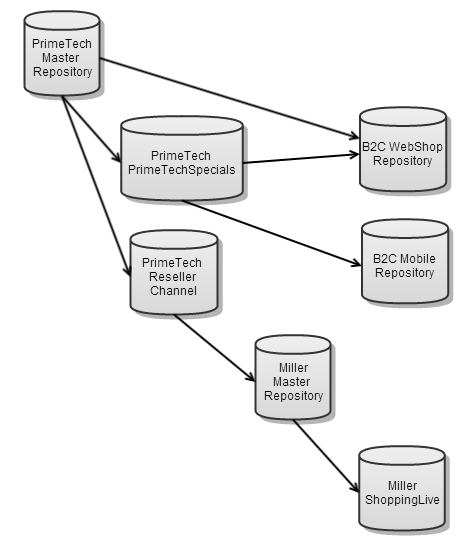 Since an application can access multiple parent repositories if enabled (see in the diagram below how two repositories are shared to B2C Webshop), an ordering is needed to decide which objects of which repository take priority at rendering time.

Example: Assume there is a system-managed homepage object existing in every repository (because the PageEntryPointDefinition is visible in all contexts). Now, a business user can assign page variants to every homepage object. At the end the homepage is rendered in the context of B2CWebShop application. In which order should the page variant lookup combine page variants assigned to homepage object when they can be found following two (or more) separate paths?

As depicted in the diagram below, this ordering is achieved by calculating and using a position attribute for the sharing relation. It is determined automatically by the position of the source repository in the organizational hierarchy compared to the target repository. The rule is that the more specialized CMS objects take priority over the ones coming from other repositories depending on the position that has been calculated. Using the diagram below, CMS objects are prioritized in this order: B2CWebShop-Repository > PrimeTech-PrimeTechSpecials > PrimeTech-MasterRepository. 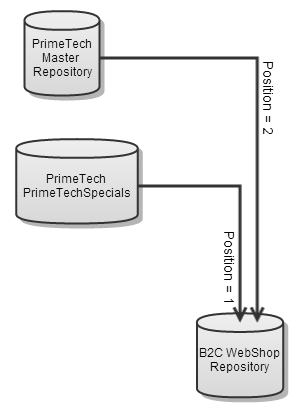 Technically, the content sharing relations between content (repository) domains are represented by proxy repository objects with a newly introduced type code of 27, meaning that this is a content sharing proxy repository. As stated in the sections above, these repository objects have to define an ordering on its own. This is achieved by a Position custom attribute of type integer which is set at creation time of the sharing relation. This is achieved automatically by determining the position by the organizational hierarchy level of the source repository compared to the target repository.

Developers get access to detect and manage existing sharing relations by using the following interfaces/classes.

The ContentSharingHelper is a convenience class acting as a wrapper to ContentSharingProvider that encapsulates a single sharing path. Such a path is a simple sorted set of Domain objects. First containing the leaf Domain, all Domain objects in between and last the root Domain.

The ContentSharingPreparer is a dbinit preparer. It allows to establish content sharing relations during database initialization. It can be configured via a property file that is provided by the enclosing dbinit definition script.

Add the ContentSharingPreparer to the dbinit.properties of the cartridge. Use the to-be-created property file as parameter.

The property file that is to be created to establish content sharing relations has the following format: