This chapter gives an overview of all basic concepts used in the CMS. A shop storefront is broken down into the essential parts as seen by the CMS.

The content itself that is to be brought to and displayed in the storefront by means of the CMS can be roughly divided into two groups:

Apart from the content in content pages, a storefront has to provide a lot of functionality dealing with, e.g., basket handling, order processing or product search. The pages presenting these functional blocks to the consumer in the storefront are called "Functional Pages".

All types of pages mentioned in the last section may be implemented in the storefront by using the CMS. Since pages may alter their appearance according to certain criteria, the CMS considers them as having an inner structure that consists of the entities embodying several appearances. Such an entity is then called "Page Variant". The following diagram outlines this concept by showing a page that changes its appearance each weekday:

So, in terms of a CMS, a page is an entity with its own identity and page variants (being entities themselves) as its constituent elements.

A page variant implements the appearance of a page, but most likely has an inner structure itself. A page variant can be decomposed into its inner parts or vice versa put together from smaller parts which in turn may also be built up from smaller parts and so on. In other words: the structure of pages simply follows the composite pattern with page variants always being root composites. These root composites are not part of other composites, and all the other units are composites or leafs.
In the CMS, the normal composites are called "Components" and the leafs "Configuration Parameters". Configuration parameters are single objects without any child objects; they usually represent the actual content in the CMS, such as text, images, links and so on. 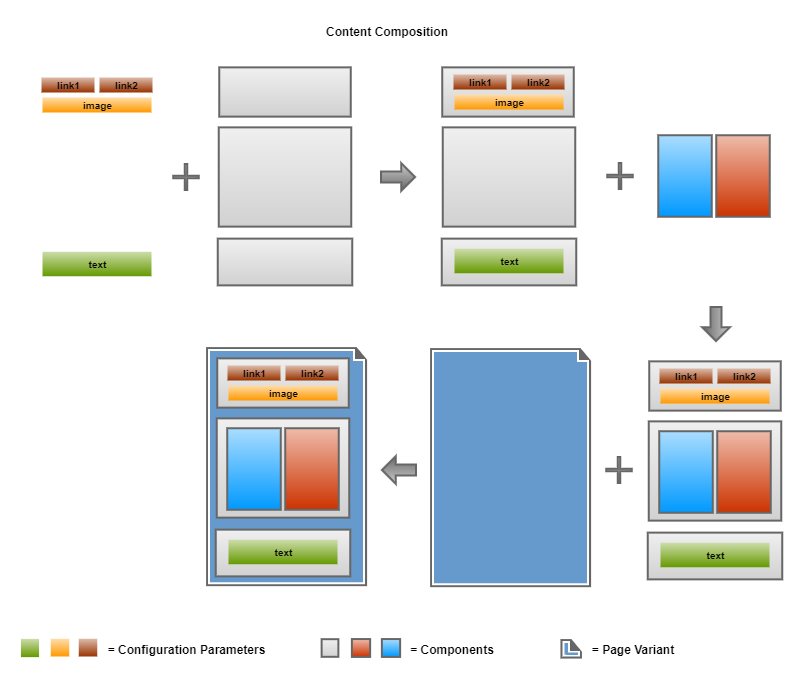 The following diagram compares the common composite pattern with its application to the CMS, i.e., page variants, components, and configuration parameters:

The CMS or content may be viewed from various perspectives or according to different aspects and then divided into several concepts, layers or artifacts. The last chapter has already given an overview of the CMS from a back office user's perspective. This chapter tries to labor on further perspectives to line out all the common conceptual patterns and layers used throughout the whole CMS.

One content aspect deals with the question of how to plug in certain content units somewhere else, be it other content elements or non-content elements such as pipelines or plain ISML templates. The general concept covering this aspect in the CMS is called "content entry point".
One type of content entry point has already been introduced, namely the "page". One of its tasks is to link page variants directly into the storefront structure at defined nodes. This can be done by placing a page directly at the end of a viewing pipeline (as already mentioned, the storefront structure is mainly encoded in viewing pipelines). When the pipeline is executed, the page will select the proper page variant which will then be rendered as the final result of the pipeline in the storefront.

The concept of content entry points implies another kind of content elements, the ones to be plugged in somewhere else and as such must embody real content that is rendered in the storefront. The above-mentioned page variants are one type of these elements; the others are components and configuration parameters.

The diagram shows an overview of all types of content entry points which will be explained in up-coming sections. Placeholders are only mentioned here for the sake of completeness and will be described in a separate document: Concept - Content Templates. Placeholders require familiarity with a lot of concepts in advance, hence will not be explained in this document; placehholders embody an advanced concept of content composition.

2.1.1 Getting Content Into the Storefront: Page and Component Entry Points

From a runtime perspective, content entry points are eventually realized by POs and as such are passive objects, i.e. they cannot render by themselves. Therefore, the CMS comes along with facilities to embed page entry points and component entry points in the storefront; the former will be bound to the storefront by a special pipeline, ViewPage-Start, and the latter by a particular ISML tag, ISContentInclude. Both have to be configured with the ID of the content entry point to be rendered. This can be done either literally or dynamically by using an ISML expression.

Almost all page variants most likely have an inner content structure comprised of components which in turn may consist of further components. The means to allow for this kind of content composition are slots. Slots are spots or areas in page variants and components where other components can be plugged in. It is possible to fill one slot with more than one component. Which ones and how many of them will be shown in the storefront is decided at rendering time and is steered by certain facilities that will be explained later on.

The left part in the depiction above shows a page variant meant to present categories together with their products in the storefront. It has three areas:

Technically, each of these areas is represented by a slot which then holds further components. The header slot is filled with a header component, the footer slot with a footer component, and the slot representing the main area with a product browsing component. The latter has a slot itself where two components are plugged in: one for the category navigation and one for a list of products assigned to the category currently selected in the category navigation component.
The right part of the depiction shows an object diagram demonstrating the decomposition of the page variant on the left in its constituent parts. The relations between ProductPageVariant HeaderSlot, ProductBrowsingSlot and FooterSlot are of type composition, i.e., HeaderSlot, ProductBrowsingSlot and FooterSlot are parts of ProductPageVariant and may be regarded as attributes of ProductPageVariant and, as such, are bound to its lifecycle. The same applies to ProductBrowsingComponent and ContentSlot. Components visually placed within slots are assigned to them via aggregation relations, from a technical point of view. This means, they may be considered as part of the component or page variation the respective target slot is owned by. However, they exist on their own and can be re-used by other components or page variations by simultaneously assigning them to other slots.

Content development takes place in a model-driven manner; i.e., content instances will be created and linked with each other as defined by a model which is logically called "Content Model". The content model in turn represents a structure of elements and relations between them which is created and changed according to certain rules and type restrictions. These types and rules are defined in a further model acting as model for the content model and, since it is a model of the content model, is thus called "Content Meta Model".

The content meta model embodies the core of the entire CMS. All content management and development tools as well as the entire content rendering in the storefront do either directly or indirectly base on or derive from the content meta model. It is part of the IS7 platform and as such is fixed and will not be changed by content developers or editors. 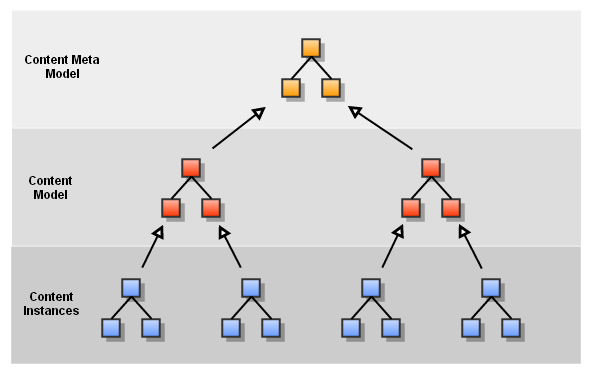 The diagram below gives a more detailed view of the CMS layer model, in particular with respect to the physical representation of the single items at each layer and their storage location. Another aspect covered by the diagram is which layer is relevant at development time, i.e., which items are created or maintained in Intershop Studio, and at runtime, i.e., which items are managed throughout the back office and used in the storefront. 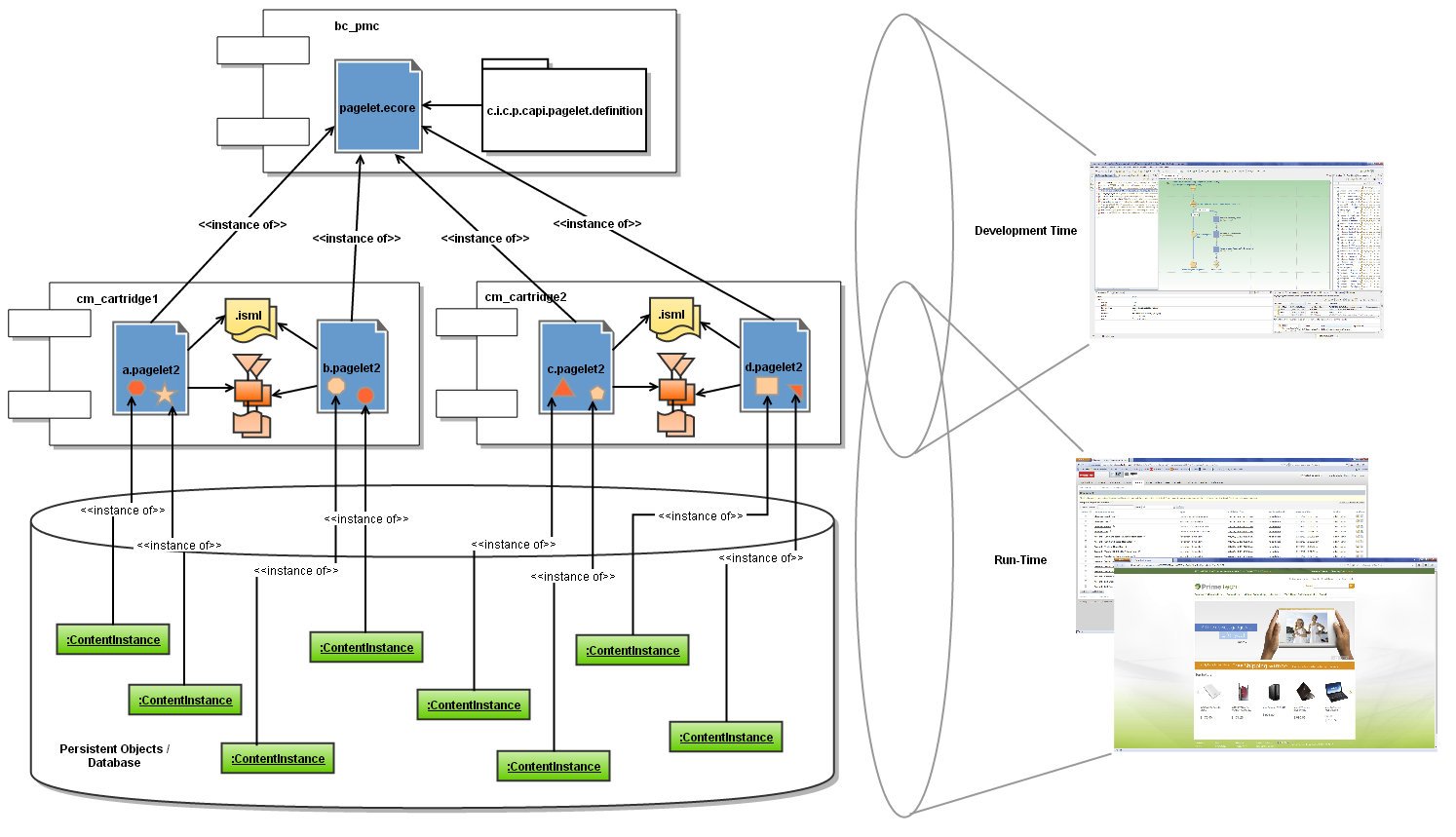 2.3 Mapping of Content Concepts to the Corresponding Technical Counterparts