This document describes the concept behind the new campaign business object introduced in Enfinity Suite 6.5. Campaigns are used to bundle other business objects, e.g., promotions or content. By means of campaigns it is possible to set several properties of these objects at once. Primarily, time control and user group assignment are addressed. A campaign does not only represent various marketing actions (as a business view suggests) but is more like a "clamp" around other marketing-related business objects.

The concept is addressed to both, developers and business users, who want to understand how campaigns are implemented and what is the standard use case for that feature.

A business object belongs only to one campaign at a time. This is to avoid confusion caused by overlapping campaigns. The current implementation realizes assignments for the following objects:

The visibility of a campaign is managed by means of target user group assignments. Target user groups can be customer segments or user groups of affiliate partners. Furthermore, a business object can be configured to use its own user group. 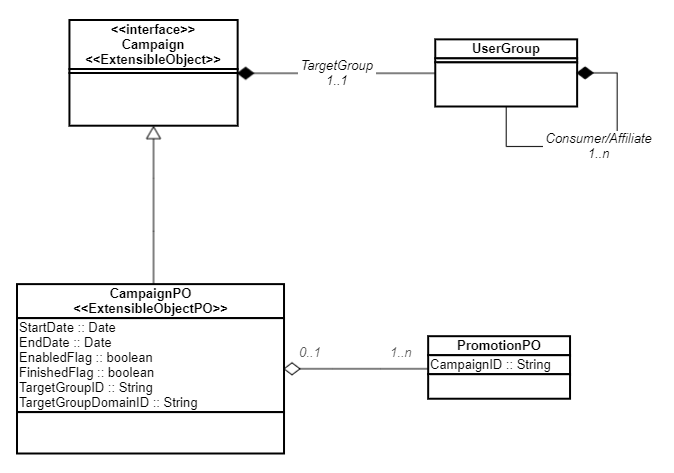 For instance, to make a web shop successful you have to acquire and bind new customers. That is why a shop manager decides to make special offers to new customers. In the past the marketing department of that shop already created some sophisticated promotions. For reasons of efficiency, existing promotions should be reused. That is why a campaign is created. The campaign should be active only for one month. At this time, a banner should be visible at the main entry page of the web shop.

The following needs to be done: