This document gives an overview about the Gradle-based build tools, that are used to create and publish software components to an artifact repository.

This section gives an overview about the servers and their configuration, that are needed to run the Intershop build tools in a continuous integration environment. The following figure describes on a very high-level, how these servers interact with each other as well as where the particular build artifacts are located. Please read the Concept - Continuous Delivery Tools -> Infrastructurebefore, if you are not familiar with the overall concept: 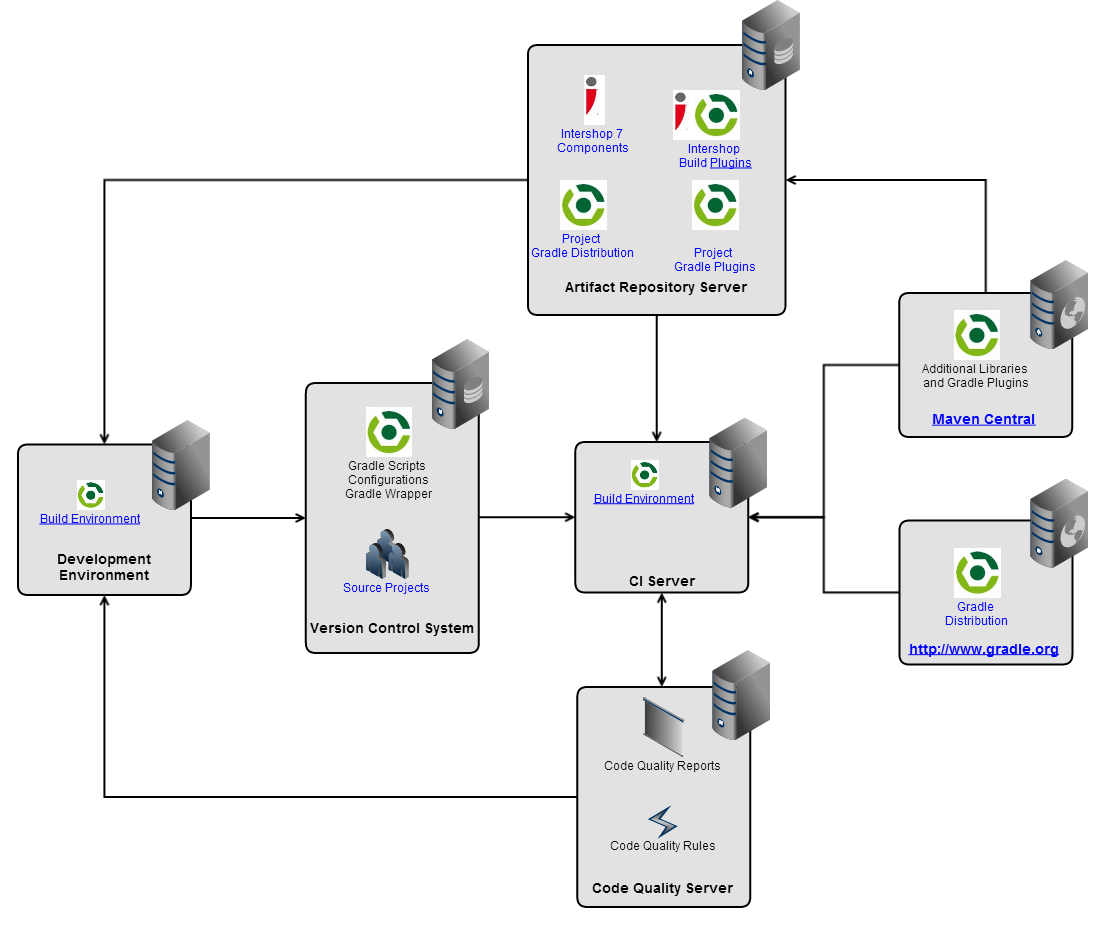 The Intershop build tools require some tools and environment variables before they can be executed.

The approach is based on the Gradle webinar "Standardizing and Administering your Enterprise Build Environment".

Since Gradle Tools 2.0 the corporate Gradle plugin is replaced by:

A corporate Gradle distribution consists of:

The Gradle wrapper is a small Java program that downloads a Gradle distribution and starts it. It is stored in the VCS with every source project and contains a URL to the corporate Gradle distribution. By checking out this wrapper and invoking Gradle through it, the project specific configuration is automatically loaded on every Gradle invocation .

This makes the Gradle wrapper the preferred way of starting a Gradle build.

There are different kinds of Gradle plugins in the component oriented build of Intershop. Most plugins come with a default configuration, so for the most system components it is not necessary to create a special configuration. The Intershop Gradle plugins extend the Gradle DSL with their own extensions.

Plugins for managing the repository chain, Ivy patterns and versions. These plugins are typically applied by the Project Gradle Distribution.

Plugins for Different Types of Cartridges

Depending on the contents of a cartridge different plugins must be applied for building it. These plugins cover building most common artifacts in Intershop cartridges.

Plugins for Special Types of Artifacts

This configuration is used for all components in a component set. This should reduce the overhead when changes on this level in the configuration are necessary.

Properties of the form "filter.*" and "version.*" are interpreted by the Versioning plugin, see Versioning.

The system components reside in a system component set and are part of a multi-project build process as described above. The Intershop Build Tools are based on the standard plugins delivered with Gradle, e.g., the Java Plugin.

The following table gives an overview about the project layout of a system component / cartridge:

The plugins for different system component types can be combined for an Intershop Cartridge.

Intershop provides a special version plugin, this plugin sets the correct versions from the filter and versions settings in the gradle.properties.

Compile dependencies of a component are not resolved transitively in the Intershop component oriented build.

The publishing process is always a part of the build process. Publishing makes built artifacts available for the usage in other builds and for deployment. In the most cases artifacts are published to shared repositories as part of the CI build. Developers publish artifacts always to a local repository.

An Intershop component consists of more than one artifact. Therefore Intershop uses Ivy Publishing for sharing of artifacts.

The Intershop base plugin applies the Gradle "ivy-publish" Plugin.

There are two types of dependencies:

It is possible to write dependency version numbers directly into the  build.gradle file, as described by the Gradle User Guide. This however has several disadvantages:

Using version expressions, like 1.0.0.+, that resolve dynamically to the latest matching version does help with the first two items. It however introduces a strong instability. Executing a command once and then a second time can lead to different results, if in between a new version was published. Also previous build processes cannot be repeated to diagnose problems.

The versioning plugin controls version information for all build steps including assembly. However, it does not affect the deployment, whose versioning is managed only by the deployed assembly's ivy descriptor.

They determine the version of multiple components at once by specifying an assembly or system component set. In the example above all dependencies to components contained in version 7.4.6.1.201312121212 of the assembly intershop7 will be resolved using the versions given in the assembly's ivy.xml file. For example if intershop7 in version 7.4.6.1.201312121212 contains version 2.2.25.0.20131125224905 of com.intershop:3rd_apache, dependencies to 3rd_apache will resolve to this version. Another example using a component set: Specifying filter.com.customer.set.platform-cartridges = 1.1.0.0-local causes a build against local versions for all system components in this set.

Filter assemblies and their own versions

Starting with Gradle Tools 2.1, filter properties do not apply for their own assembly build process anymore, in order to avoid cyclic reproduction of incorrect version information.

Example: Given a filter property filter.com.customer.assembly.customer-assembly = 1.1.0.0-local, this version filter does not apply for the build of customer-assembly itself. The assembly must therefore provide versioning for all of its contained system components via other means, e.g., via a filter of a component set: filter.com.customer.set.customer-cartridges = 1.1.0.0-local.

The following rules are used to determine which version to choose:

Filter conflicts can be solved by disambiguation. You can either:

Gradle project properties can be set in different physical locations:

If different locations contain different values for the same property, they override each other in this order. That is: