Basically, pipelines may be considered as directed graphs whereas pipeline nodes represent the vertices and transitions act as edges. The pipeline nodes can be divided in two categories: The ones provided by the pipeline framework itself and pipelets which are extensions of the pipeline framework and have to extend from a particular framework class. The former embody the basic programming constructs to model program flows such as loops, conditional statements etc. and, as such, make up the core of pipelines as a programming language. The latter are meant as access points to business functionality and, thus, bring the business aspect into pipelines. A combination of  instances of both node types and the transitions between them within a pipeline represent a step within a business interaction. At pipeline level, pipelets represent basic units of business funcionality. A pipelet implementation itself should encode as less business functionality as possible but re-use already existing functional blocks. Ideally, these functional blocks are business objects but programming artifacts from lower levels such as POs and their managers may be found there as well.


Over the years a few drawbacks of pipelets have become visible. Pipelets can only act as nodes within pipelines but not as start or end nodes. They may only have one input connector and one output connector apart from an optional error connector whereas the latter cannot have its own set of parameters. As a result, functional blocks that would have better been encapsulated in one pipeline node, have been spread over several pipelets and have lead to rather blown up pipelines. From a business view, it is often hard to get the gist of such pipelines whilst their maintenance and further development often turns out to be rather tedious and complex. That way the original intention of the pipeline concept has become compromised and the pipeline programming language has often been abused as a rather low-level programming language.

Pipeline Nodes are a means to bring pipelines back on track by allowing a developer to introduce their own nodes. Pipeline nodes are not a new concept but, up to now, with pipelets a developer has only been allowed to contribute to one type of them. Now, a developer can extend the pipeline framework with nodes that can take up any position in a pipeline and may have more than one input or output connectors whereas each connector may have its own parameter set.

The pipeline node programming model is all about leaving the developer as much freedom as possible and only relies on a few Java annotations. There is no explicit meta model as with pipelets or an abstract class that needs to be extended.

A class meant to be a pipeline node implementation needs to be annotated with  c.i.b.pipeline.capi.annotation.PipelineNode:

In case the pipeline node shall have a name other than the simple class name of the implementing class, the annotation needs to be augmented with a name attribute:

There are certain criteria a class implementing a pipeline node has to fulfill:

In most cases pipeline node classes probably do not need constructors. Instance variables holding references to managers and the like can be initialized via dependency injection.

Starting with Intershop 7.6 additional attributes were introduced to configure start nodes. The following attributes are supported:

A pipeline node may have more than one input. The counterpart to inputs or input connectors at Java level are simple methods. To declare a method as pipeline node input it has to be annotated with c.i.b.pipeline.capi.annotation.PipelineNodeInput:

The input connector appears in the pipeline editor with the same name as its associated input method. The developer may choose another name by providing a value for the name attribute of the annotation:

Output connectors are represented by object fields. The respective annotation here is  c.i.b.pipeline.capi.annnotation.PipelineNodeOutput. Again, the developer may explicitly define the name of the output connector in the pipeline editor by supplying the name attribute, otherwise a fallback to the field name applies.

If input methods return a value, it is expected to be one of the object fields marked as pipeline node output. As each of these fields is assocciated with an output connector, the pipeline run-time can detect which output a pipeline node instance returns when a pipeline is carried out.

If a pipeline node is not supposed to have any output connectors, like a stop node, the input methods do not need to return a value; they can either return void as return type or just return  null.

The following code snippet roughly depicts how the basic code structure of the loop node would look like if it would be implemented with the new pipeline node concept:

is equivalent to the parameter set  {Name, Available}.

To provide a pipeline node input with parameters the respective input method needs to declare exactly one argument whose type must be an interface. The pipeline run-time then ensures that the method is served with an object matching the interface and holding the required parameter values when it is invoked. In case a pipeline node input does not need any parameters, the respective input method may indicate this fact by either having no argument or by specifying one argument whose type is an empty interface.

Pipeline node outputs, i.e., their respective object fields, must have interfaces as types. If an output does not have any parameters, the respective interface has to be empty. Again, the pipeline run-time is responsible to properly initialize the object fields representing node outputs. A node implementation must never change the value of these fields! Similar to the fixture of test cases, the node output object fields will be newly-initialized each time an input method is executed. Although they are object fields, their values can be regarded as local in the scope of the method invocation, i.e., even if the belong to the same node instance, their accessor methods may return different values per method run.

To declare a parameter as optional the respective method has to be annotated with  javax.annotation.Nullable. Input parameters are defined by accessor methods and output parameters by mutator methods. Both types can be mixed within one interface:

IO can be used as interface for input method arguments and node output object fields.

Coming back to the loop node example of the previous section, here is a state diagram with named connectors as well as their parameters: 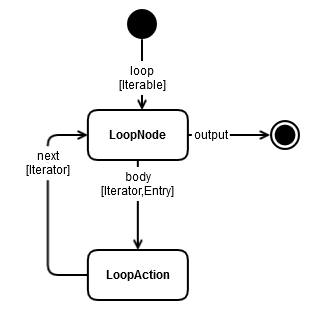 and here the full implemenation of the node showing the usage of parameter interfaces:

Configuration parameters of type PipelineElementReference come into play when a pipeline node needs to refer to other code artifacts somehow involved in the pipeline execution. Typical examples are ISML templates, webforms, content page types or pipeline themselves.

A pipeline element reference holds a reference string that works as qualified name of the targeted pipeline element and is sufficient to look up the actual element at run-time and development time, i.e., implementations of PipelineElementReference are expected to return the pipeline element via getReferencedElement() without further explicit information. This does not prevent that an implementation of  PipelineElementReference.getReferencedElement() resorts to certain run-time variables available in its execution environment such as the application context. The qualified name of a pipeline consist of the pipeline name and the start node name, e.g., ViewPage-Start. The qualified name of a content page type is made up of the cartridge name followed by the name of the content model and the model element itself, e.g., app_sf_webshop:HomePage.pagelet2-Page.

There is no general interface for pipeline elements, but most of them probably need to be parameterized to be carried out successfully, i.e., they have a parameter interface that must be served with values in their execution environment. To make their parameter interface known to pipeline nodes, their types have to implement ParameterizedPipelineElement. This interface provides a means for pipeline elements to explicitly express their requirements regarding their execution contexts in terms of objects of type c.i.b.pipeline.capi.definition.ParameterDefinition.

The following code example roughly outlines the just described concept using the example of a ficticious pipeline start node class whose instances may be referred to and carried out by pipeline nodes: