The reCAPTCHA v3 feature is available by default with ICM 7.10.15 or later.

reCAPTCHA v3 is a CAPTCHA service implementation from Google. It provides website protection against automated bots and spam by adding an additional widget to web forms which verifies that the user accessing the page is a real human being. In contrast to the first and second version, users are now no longer required to manually solve CAPTCHA challenges each time they submit a form. Instead the verification is done in the background without any user interaction. If the Google service recognizes the user as a human being, then the protected form is submitted.

New to reCAPTCHA v3 is that the service will now return a score between 0.0 and 1.0 based upon the user's interaction with the site, with 1.0 being very likely a good interaction and 0.0 being very likely a bot. The site administrator can then decide which scores are considered trustworthy. Additionally, a new action concept has been introduced: An action can be assigned to each individual CAPTCHA in the web shop which can then be used to get detailed break-downs and statistics in the reCAPTCHA administration console.

The reCAPTCHA service is integrated into Intershop Commerce Suite by using the Managed Service Framework. Please note that this document only contains information about the reCAPTCHA-specific service implementation. Generic details on the CAPTCHA framework and about how to include CAPTCHA fields into web forms and ISML templates can be found in Concept - Captcha Framework.

reCAPTCHA is implemented as a managed service. For activating the service for a given channel, please refer to Concept - Captcha Framework (section Activation and Configuration).

A (free) Google account is required to get the key pair for a given domain. Keys can be requested here: https://www.google.com/recaptcha/admin/create

For testing purposes, the following keys can be used, which will allow all verification requests to pass successfully. Alternatively, the score threshold can be set to "0.0" which will achieve the same result.

A warning will be displayed on the CAPTCHA widget when using these keys. Do not use them in a production environment.

To include reCAPTCHA v3 into a web form, see Cookbook - Captcha Framework. Alternatively, a REST request is available which allows to retrieve a code snippet that can be used to protect a form with a CAPTCHA, see Cookbook - WebShop REST API.

For version 3, a new captchaaction parameter has been added to the ISML module which renders the widget:

This parameter defines the action identifier that is associated with the form and which is displayed in the statistics in the reCAPTCHA administration console. If no action is passed, then the name of the form field's form is used as fallback.

When rendering the template, the following code snippet is inserted into web forms which contain a CAPTCHA form field:

The configured site key and parameters from the ISML module are then included automatically as well. The script assures that the generated reCAPTCHA token is inserted into the associated form field, so it can be submitted to Google for verification when the form is submitted.

A given token is only valid for two minutes, which is the reason why the script includes a function that re-triggers the verification every 1.9 minutes.

If the CAPTCHA widget is not to be included automatically, the following template needs to be overridden to provide custom functionality:

If the CAPTCHA recognizes the user as a bot, an error is displayed: 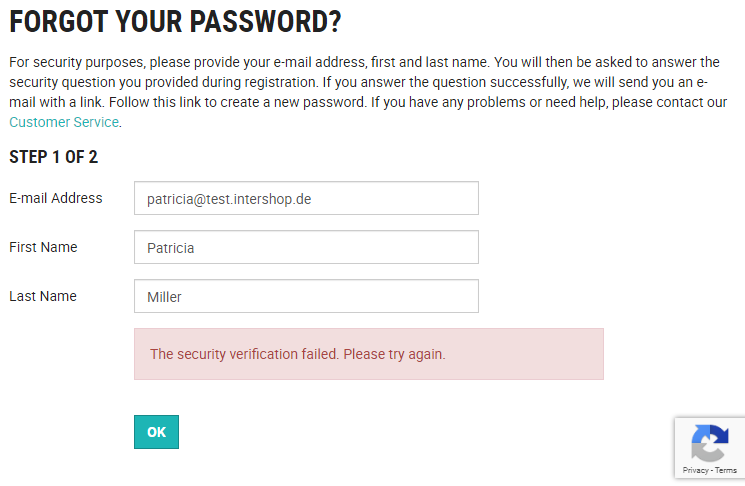 The error is part of the ReCaptcha.isml template in the implementation cartridge (see above). To customize the error message, override the localization property recaptcha.v3.incorrect.error.

When the CAPTCHA script is executed, a token will be generated and inserted into a form field. Upon submitting the form, this token together with the configured site-specific secret key and the remote IP address of the user is transferred to the configured verification URL. The token will be validated and a JSON response is returned here:

If the received score is greater than or equal to the configured score threshold and the action matches the action identifier of the submitted form, the request is considered valid. The response is internally transformed into a CaptchaResponse which is then handled by the CAPTCHA framework. A list of possible error codes can be found in the official documentation: https://developers.google.com/recaptcha/docs/verify

All artifacts for the service implementation can be found in the cartridge ac_captcha_recaptcha (component set p_platform).