The Concept is addressed to developers who want to make use of the IS 7 Persitent Objects Layer (Data Layer) to create new persistent objects or re-use already existing ones .

These classes are usually part of the internal package of a cartridge and not exposed publicly. Apart from this abstract base classes of persistent objects may participate in the public API.

Base Classes for Persistent Objects

Many POs in Intershop 7 are derived from the general base classes RegionalSettingsPO or ExtensibleObjectsPO, which are both part of com.intershop.beehive.core.capi.domain. PersistentObjectPO automatically provides a range of attributes, ensuring these attributes are defined in a way compatible with Intershop 7 mechanisms and processes. Attributes automatically provided by  RegionalSettingsPO include: 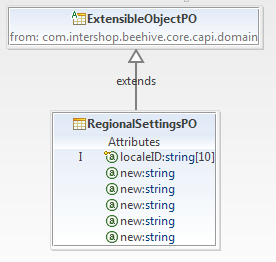 The following EDL snippet defines a persistent object, including a relation respective a dependency to other objects.

Typically, your object model consists of a set of POs that do not stand alone, but are connected in various ways. In the object model, these connections between classes are modeled as relations or dependencies.

The following sections describe all aspects of relationships in more detail.

Intershop 7 is based on two basic relationship types:

Compared to relations, dependencies are internally treated in a very different way. Dependencies are not registered in the ORM deployment descriptor file and they do not require to re-create the referenced class. Therefore, dependencies can be used to link custom PO classes to CAPI objects that Intershop 7 provides (such as Product).

Depending on the multiplicity types on each side of the relationship, three basic kinds of relationships are commonly distinguished:

One-to-many relations are common in relational database design, allowing the representation of complex data sets in an economic way. For example, each instance of WarehousePO points to the instances of StockPO that belong to it. Likewise, each StockPO points to its WarehousePO.

To relate warehouse and stock data as described, a special column is needed in the StockPO table, identifying the correct WarehousePO instance for each StockPO instance. This special column acts as the foreign key, and it commonly maps onto the primary key of the related table, in our example, the WarehousePO table.

Returning to the representation of relations, the implication is that you must introduce a special attribute that serves as the foreign key and maps onto the primary key attribute of the associated PO class. In a one-to-many relation, the foreign key is defined within the class on the many-side, e.g., StockPO, and it maps onto the primary key of the class on the one-side, e.g., WarehousePO.

One-to-one relations are organized in precisely the same way, with the exception that the foreign key can be assigned to either class.

For one-to-many relations, the code generator creates special methods for both classes involved, the class on the many-side and the class on the one-side. Methods differ depending on which class is considered.

Dependencies are unidirectional relationships to classes which implement PersistentObject. Unidirectional means that they can be traversed only in one direction: from the source class to the target class. The target class always has a multiplicity of 0..1. In the EDL snippet from WarehousePO below, the dependency expresses that each instance of WarehousePO is associated with exactly one instance of Address. In contrast to normal association relationships, the dependency does not express the opposite statement, namely that each instance of Address can be associated with one or more instances of WarehousePO. The Address has no knowledge about the existence of the WarehousePO and the relationship between both entities. However, if the business logic requires this feature, it would be possible to determine all instances of WarehousePO which are related to a given address by using a query. The result may contain many instances or just one single instance if this is restricted by the implementation. Thus, dependent on the implementation a dependency may be a one-to-many or one-to-one relationship.

The code that code generator creates for dependencies only affects the source class, not the target class. Therefore, dependencies are particularly useful if you create new POs coupled with existing objects (such as Address) which you are unable to recompile or change.

Another common use case is hiding the relation to the One-Side-PO of a PO located in the same cartridge, because it is not intended to make this relation "public" for this PO. In that case the handler must not be defined and the factory of the PO is called to locate the related instance by a primary key lookup. Another use case is avoiding the creation of bi-directional relations to mass data.

Typically, a dependency connects a custom PO with other persistent objects represented by a CAPI interface.

In our example, the dependency connects the custom PO WarehousePO with the standard Intershop 7 CAPI interface Address. When modeling a dependency like this, you have to provide the symbolic name of the manager which provides access to the object behind the CAPI interface.

The code generator uses the provided manager to create the accessor methods.

The handler class has to provide a resolve<ClassName>FromID() method. Going by example, when constructing a dependency from a custom class to the CAPI interface Address, the respective manager would be the ProfileMgr (which provides a resolveAddressFromID() method).

In addition, the business object behind the interface has to provide a getUUID() method. Otherwise, compile errors may result since the setter method of the foreign key calls getUUID() of the interface.

The code generator creates a getter method which allows you to access the target class instance to which a particular source class instance is connected and a setter method to assign a source instance to a target instance. For example, for the dependency connecting WarehousePO with Address, the following methods are generated:

Many-to-many relations are common in Intershop 7 applications. For example, consider the relation between product and supplier: each supplier may deliver more than one product, while each product may be delivered by more than one supplier. Or, product bundles, which combine products to form a new product, e.g., a computer, mouse, and monitor may be bundled into a complete computer package. Here too, a many-to-many relationship exists, because each product bundle can contain many different products, and each product can be part of different product bundles. 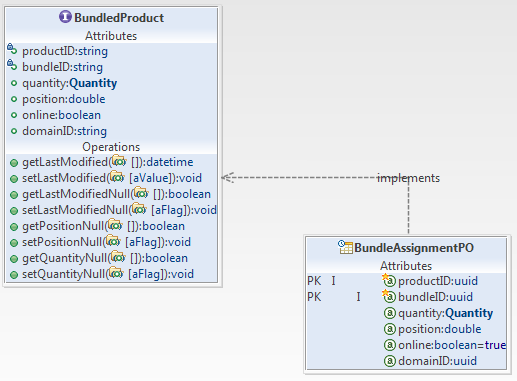 There are many use cases where a persistent object implements a CAPI interface. This interface can be modeled as well or imported as an external type. An example of a set of CAPI interfaces modeled on top of custom POs is shown in the following EDL snippets:

Note that POs and interfaces use different base classes: