If we talk about services, we must clearly understand what a service is (in our context). In an end-to-end communication arrangement one communication partner provides certain operations that are bundled in a service; a client calls those operations. The managed part of a service refers to the service framework's capabilities.
For example, a service connection could be established by taking certain objects and arranging (marshaling) them with a created set of call parameters, and sending them via technical connection. You also need to consider logging and monitoring, as well as the addition of structures to assist with call configuration and its assignment to the environment in which you want to run the service. Many of these activities are handled by the "Managed Service Framework".

Services are usually described by interfaces (generally speaking, these can be but not necessarily refer to Java interfaces). That said, we should not assume that every interface is a service. 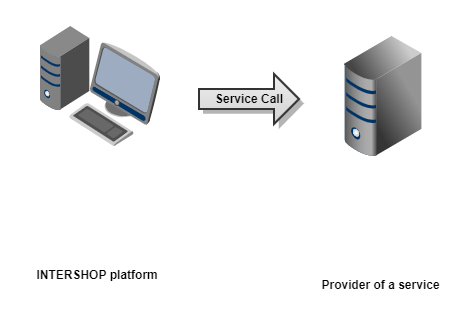 For a service call situation we assume:

This chapter describes some artifacts in the INTERSHOP platform that constitute the Managed Service Framework.

The following diagram shows - extremely simplified - the parts of the managed service framework.

The following chapters will take a closer look at the artifacts specified here and introduce additional artifacts that surround those previously mentioned.

While an adapter is the object that makes the service call possible, still, it is not a part of the Managed Service Framework. The adapter is a component that "knows" how to access the service. In the INTERSHOP platform, an adapter is defined by any Java interface (see the following chapter). There is no restriction on the adapter implementation. Essentially, any object can become a service adapter as long as it implements at least one interface.

The adapter has to take care of:

As mentioned before, any object that implements a Java interface can serve as an adapter.

However, there are some constraints that must be considered: Avoid adapters for marker interfaces and pojos.

You could think of the Address interface as being an adapter interface. However, this would mean that getting a name or getting a street are service calls. That would not be very useful.

In the INTERSHOP platform, the adapter interface is represented in two shapes:

As a programmer you might be required to use an existing service, to implement a new stub or to do both.
After reading this concept and with the Cookbook - Managed Service Framework at hand, you should be able to fulfill your task.

If you are asked to enhance/change the framework itself, do not forget to update this documentation.

Adapter interfaces should be marked as managed service using com.intershop.component.service.capi.service.ManagedService. This marker annotation is used by external tools.

This is how a service is looked up and how it is called ("use an existing service") - using the "Address" example mentioned above:

The ServiceConfigurationBORepository will be discussed later in this document. The AddressValidator is a Java interface that defines a stub for an address validator service. The variable addressValidator contains an adapter implementation. The method validate encapsulates the address validation operation of a validation service. The address parameter is considered an Address object as defined in the example above.

To implement a new stub for a service, follow these proceedings:

To make the new service adapter available in the INTERSHOP platform, some more artifacts have to be established, which will be discussed in the following chapters:

Optionally, these parts may also be needed:

There are abstract adapter classes that provide a lot of functionality that may be needed: SingleOperationAdapter and MultiOperationAdapter. For more details refer to the Cookbook - Managed Service Framework.

A ServiceDefinition is a stateless object that

Sometimes several adapter interfaces can be bundled for functional reasons. Think, for example, of an inventory service. There might be an interface that just retrieves the quantity on stock and another one that manages a reservation lifecycle. Thus, there might be a QuantityRequest interface and a Reservation interface. The two of them could be bundled to one InventoryServiceDefinition that supports both interfaces. The supported interfaces are retrievable by accessing the Collection<Class<?>> getServiceInterfaces() method.

The ServiceProvider is a stateful object (as it may hold a ServiceConfigurationBO reference) that serves an adapter that corresponds to the requested adapter interface.
Thus, it does not define more than this method:

There are so-called "old" services (services that have been implemented prior to INTERSHOP 7) and "new" services.

The ServiceDefinitionRegistry also holds references to so-called "chain elements". These are handlers that are part of the service call chain and may listen to the data exchange stream for, e.g., logging or monitoring reasons. 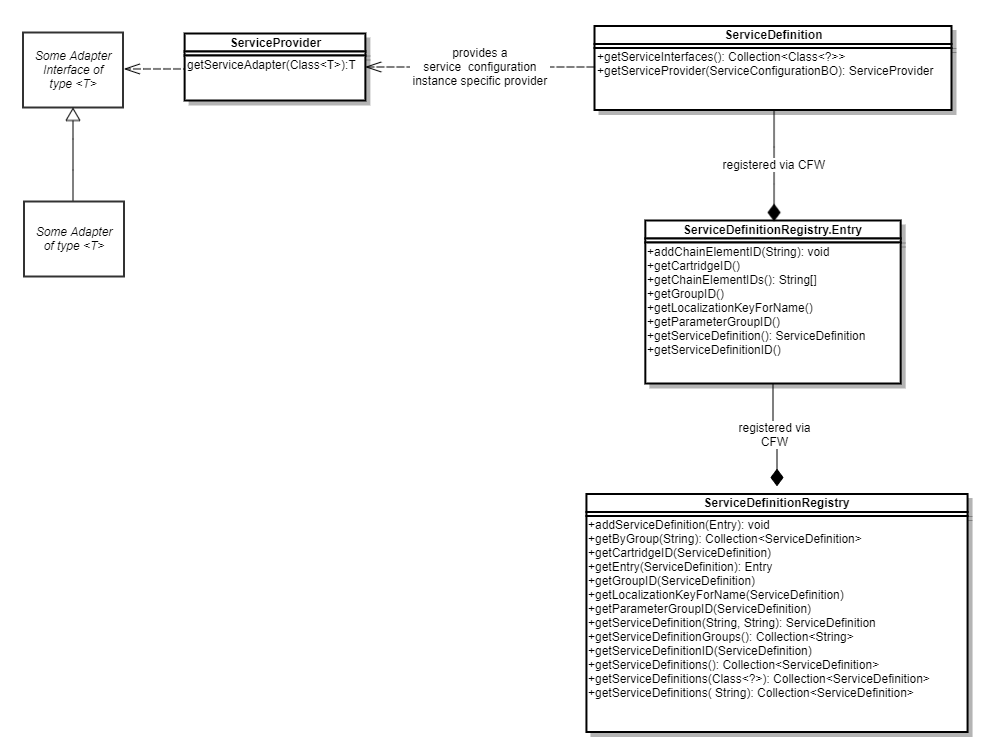 The ServiceConfigurationBORepository is just a composition of three interfaces that define three aspects of it: 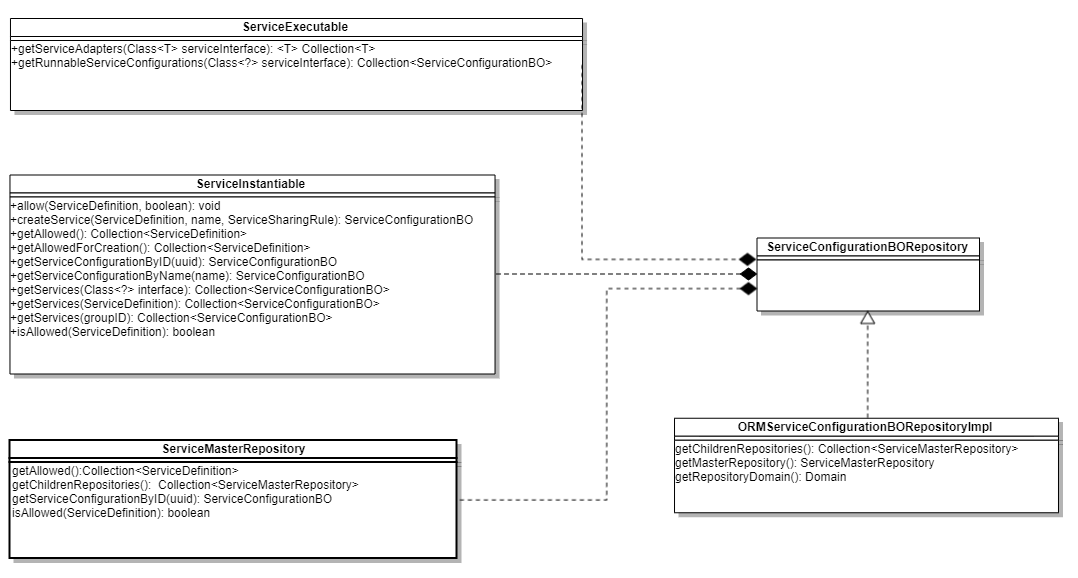 Service types can be allowed or prohibited for ServiceConfigurationBORepository instances.
Prohibiting a service type means that 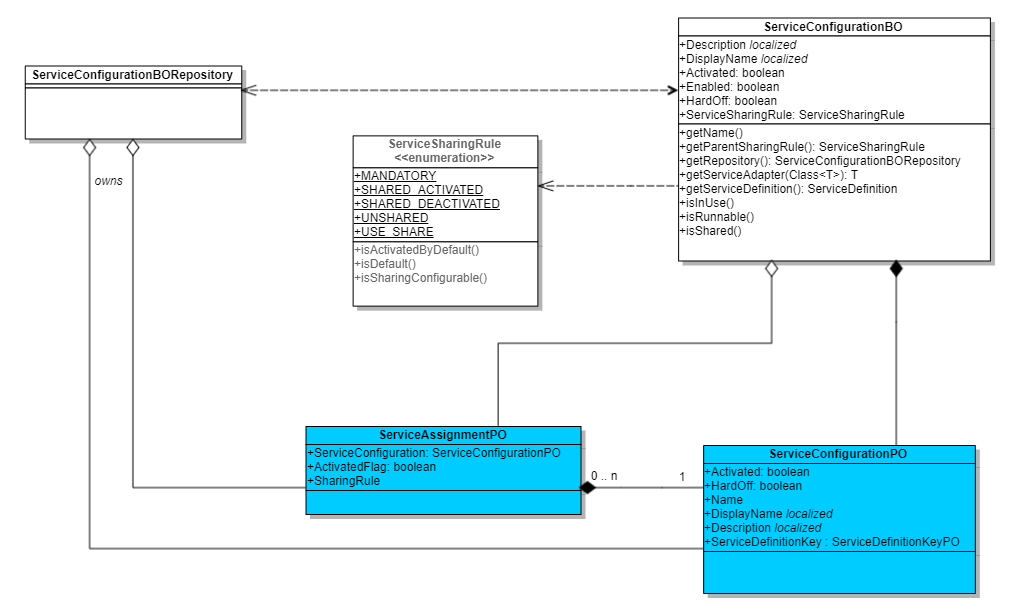 There are different requirements with regard to when a service can be executed from a certain context:

A service can be executed if it is globally enabled, locally activated, not switched hard off and there is none of the master repositories whose sharing rule is UNSHARED.

To make a dynamic configuration editable, the ParameterGroup approach should be considered.
The following steps are needed to establish a ParameterGroup together with the ability to edit it in the back office:

Following this approach there are parameters in the Intershop Commerce Management that must be defined. For detailed instructions, see the Cookbook - Managed Service Framework.

The following diagram is a "big picture" of the discussed artifacts, but shows more detail than in the introduction of this chapter.

From the ServiceExecutable to the adapter interface, there is an imaginary "horizontal line" of artifacts that are obviously used during a service call, and the blue artifact section shows the persistent artifacts. All others are surrounding classes that help to manage the core artifacts.

In the chapter "Adapter Interfaces", it has already been discussed how a service can be called. The following diagram repeats the steps once more:

The red section in the diagram above is worth a closer look:

As mentioned above, there are 4 persistent objects handled by the managed service framework:

Without any database initialization none of the services will be available.

Sometimes specific services might be crucial to make the shop work properly, for example services that are used during the checkout. Therefore, these services should be available "out-of-the-box", i.e., after a server installation.
Therefore, 3 preparers are available to initialize a configuration:

The Cookbook - Managed Service Framework includes a chapter that describes in detail how to use the named preparers.

The monitoring of services is realized with MXBeans and handlers. The ServiceChain handles all registered handlers for a service, including MonitorHandler, LogHandler, and CachingHandler.
If the MonitorHandler is registered, it tracks various data, like successful requests, average answer time, failures etc.
A call works like this: 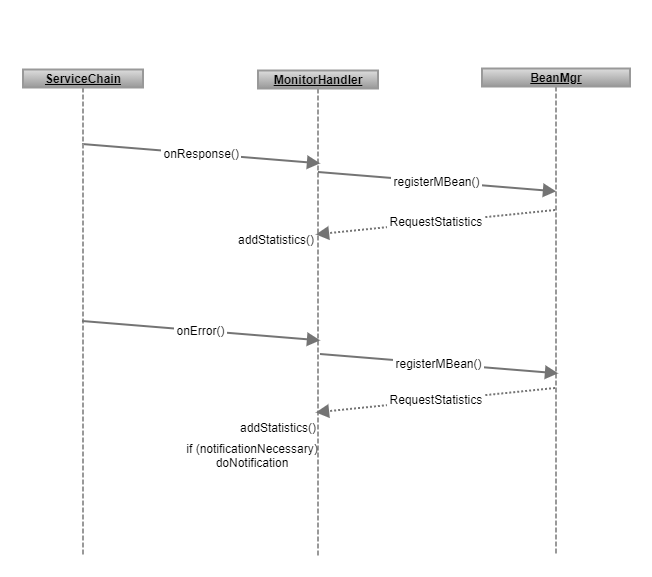 The RequestStatistics requires 3 parameters, which can be adjusted in the configuration tab of a service:

Depending on those parameters, the statistics can return a status which is either ok (green), with errors (yellow), with exceptions (red), or not used (gray).