Object replication is only available on systems that are marked as editing systems in a staging environment (see the administrator handbook of your Intershop 7 distribution).

On a business object's detail view, the object can be replicated using the button Publish to Live System. After selecting a target cluster on the next page, a batch process will be created performing the actual replication.

In a listing, one or more objects can be selected and replicated using the button Publish to Live System. The listing also includes a column Published, listing the date(s) and time(s) of the last successful object replication(s) to the target system(s).

After starting the replication, the user is taken to the batch process overview page.

Object replication can only update and create objects, not delete them.

Information for developers (e.g. on adding object replication support to additional business objects) can be found in the Cookbook - Business Object Replication. 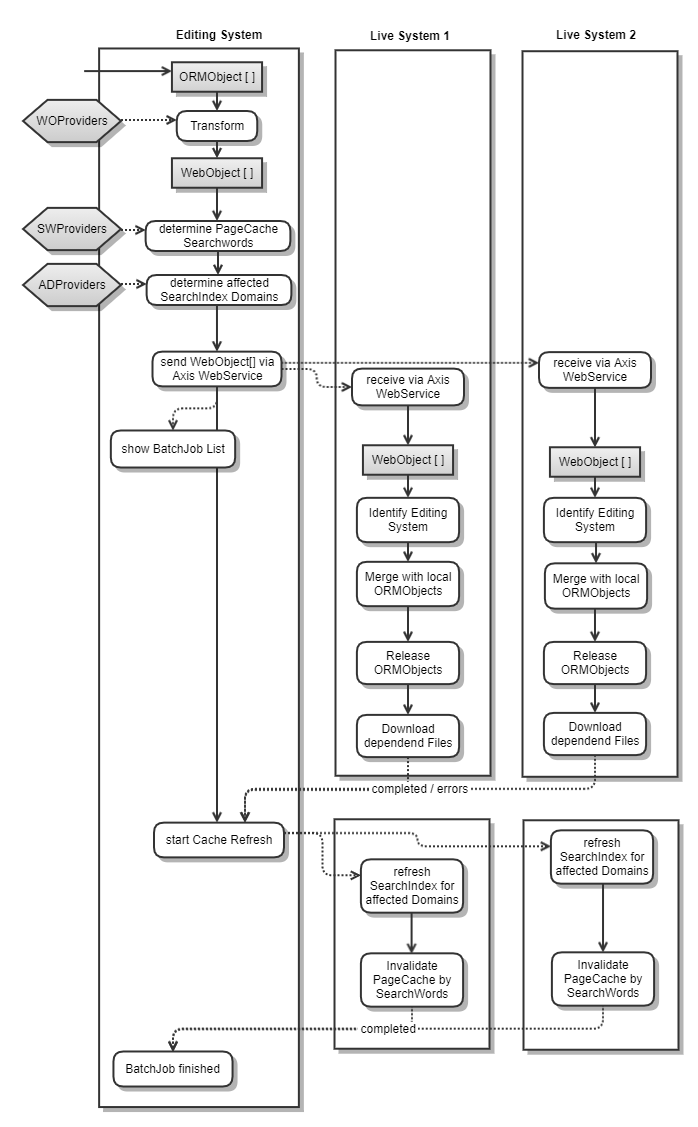 The following diagram shows the process for an example object Sample with two referenced objects, Other and Another:

(1) When the publishing of a Sample is started, the replication framework first resolves all references of the Sample by means of the SampleRefOOProvider(if there is one defined). This results in a Set<Object> containing all referenced sample objects as well as the sample object itself. From the Set an Iterator is created within which, according to the PublishOrder defined in SampleRefOOProvider, the Sample is the first/last element.

Now the elements of the iterator are replicated one by one in chunks of default size 15 where for each object the corresponding <object_type>WOProvider is used.

(3) WebObjects for Sample and its attributes are created by means of the SampleWOProvider.

(4) The WebObjects are transferred to the live system.

(5) When receiving the objects, the validate method of the matching providers will be called, where the referenced objects of Sample are validated and merged before the Sample web object itself. The validation itself depends on (i.e. is implemented in) the WOProvider. The provider can also perform some actions depending on the outcome of the validation. If the validation fails, an error will be logged.

(6) Whenever the validation of a web object succeeds, the merge method of the matching provider is called. This method is responsible for creating/updating business objects in the live system to match the transferred object.

For each ORMObject a SearchWordProvider is used (if existent) to determine significant SearchWords for invalidation of the PageCache.
The SearchWords will only be invalidated on affected sites (because only sites have a PageCache and not all sites display the affected object).
For example, if one of the ORMObjects is a product, files of the PageCache that contain the UUID, SKU or name of the ProductPO are filed for invalidation for each site that displays the product.

4.3.1 ORMObjects That Are Published During Campaign Publishing

4.3.1.1 Special Cases That Require Some Post-Processing

Now assume that the campaign validation is successful. If the campaign did not exist in the live system before, then the assigned and published content is fine. Otherwise there may be a difference between former and new assigned pagelets that has to be dealt with. This is done as follows:

The promotion post-processing in case of successful campaign validation is straightforward: No longer valid assignments to other campaigns are removed and the new assignment to the campaign to be published is confirmed.

4.3.3 ORMObjects That Are Published During Promotion Publishing

4.3.3.1 Special Cases That Require Some Post-Processing

Business object replication is not meant for mass data. For replicating mass data, staging is used which copies content from the editing-database-scheme to the live-system database-scheme.

The replication is done by sending and receiving serialized objects via web services. If a huge object (with several megabytes) is sent, the web services could massively slow down.

If the user plans to replicate a lot of objects (e.g. 10000 products), these objects will be sent in several loops, 15 objects each loop (this value can be set by staging.objects.chunksize in <enfinity>/share/system/config/cluster/staging.properties) and the cache refresh is started when all objects have been sent and merged.

Remember that business object replication is only meant for emergency updates of a few objects.
If you want to replicate a lot of data, use the Mass Data Tasks menu.