The focus lies on post-go-live deployments. Deployments during the project phase are briefly mentioned at the end of this guide.

The process consists of different steps:

Generally all communication goes through Service Desk. Tickets can be opened and managed via Support Portal or via e-mail.

At least one day (better 2 or more) before the deployment day, the release manager sends detailed instructions to OPS team via the Service Desk.

If deployment instructions are not received within this lead time, OPS cancels the deployment and a new deployment date must be scheduled.

The following information must be included:

For PWA Deployments, the following information need to be provided:

Please provide a deployment mailing list with the provision of the DPL instructions. It should contain the release manager and the deployment attendant(s) from the implementation partner and customer.

The mailing list will be used for communication during the deployment process, keeping all relevant persons up-to-date. Ideally, all participants are already included in the e-mail that provides the deployment instructions.

A close collaboration between Intershop and implementation partner is key to a successful deployment. If anything goes wrong, DEV and OPS need to decide if a rollback should take place or not. 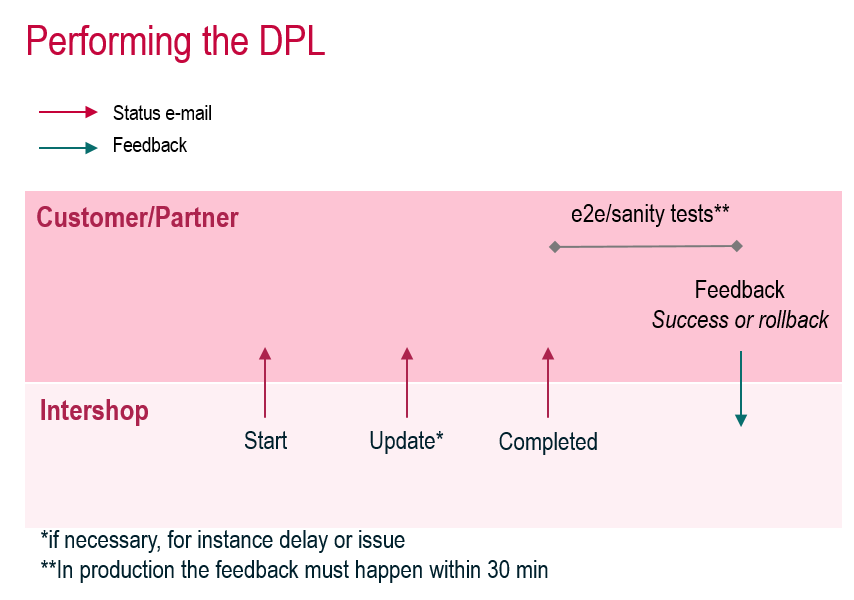 The following section describes some general and specific information around deployments.

It also contains some rules and guidelines which are required for a smooth process.

Intershop Commerce Platform systems are usually set up with an ICM application like this:

There are three different DPL types:

The software to deploy also has an influence on the type of DPL. The previous classification applies primarily to ICM with classic storefront. For other cases:

The instructions must be sent right in time. Otherwise the deployment step is considered cancelled and has to be re-scheduled.

Receiving deployment instructions is considered as final and binding deployment request. Only send instructions when the deployment is completely agreed upon/authorized on the implementation partner's (DEV) side. The requested release version has to be successfully deployed on UAT (with same tag).

Deployments which are done by Intershop must be scheduled in advance with the Intershop deployment manager.

The necessary lead time depends on the deployment type.

Generally at least one working day must follow after the deployment. The aim is to be able to solve any problems that may arise during regular working hours. No employee from the implementation partner (DEV), Intershop (OPS) or other related person is available at the weekend. Also public holidays must be taken into account.

Even with a recurring reservation, you still have to submit a Service Desk ticket each time in order to provide the required instructions.

Who Performs the Deployment?

For an ICM production live cluster (PRD-LV), Intershop Operations team performs all deployments on production, since we are also responsible for fulfilling the SLAs.

The implementation partner is able to perform DPLs via Jenkins jobs on INT and UAT.

* This includes the SYN process (if in place).

** In case of an ICM deployment (same version), a UAT DPL will be performed by OPS again (or DPL by DEV will be checked) to reduce the risk during the following PRD DPL.

If implementation partners (DEV) execute a SYN or DPL job, they are responsible for error monitoring.

With a code deployment no changes are made on the database and, as a rule, no downtime is necessary.

Hotfix deployments (=small code deployment) do not require any changes on the database and, therefore, have no downtime either.

Deployments During the Setup Phase

Deployments during the project phase, before a shop is live, are a) much more frequent and b) a lot less critical. So the process is less strict and the responsibilities are distributed differently.