The promotion validation has been reworked for 7.9 as an important part of the Order Creation Rework.

The old pipeline-based validation has been deprecated and will not be used anymore. It is strongly recommended to use the new approach because it is better tested, more stable and probably has a better performance.
Additionally it offers better ways of customization. This is described in Concept - Promotion Validation.

In the case the new solution is not suitable for certain customers or the efforts to migrate a highly customized validation seem too high, the old deprecated code an be reactivated doing some manual steps. These are described in more detail in the following paragraphs.

Validate a Promotion in the Basket

The validation of promotion codes was done (until 7.8) calling with the pipeline ProcessPromotionCodeForBasket-ValidateAllPromotionCodesFromBasket. This pipeline has been called several times from almost all pipelines in the checkout process. Since the promotion code validation is now part of the basket validation handler chain (See Concept - Promotion Validation) this pipeline is deprecated and should not be used anymore.

All pipeline calls during the checkout steps (before submit order) have be removed. Here are all affected places: 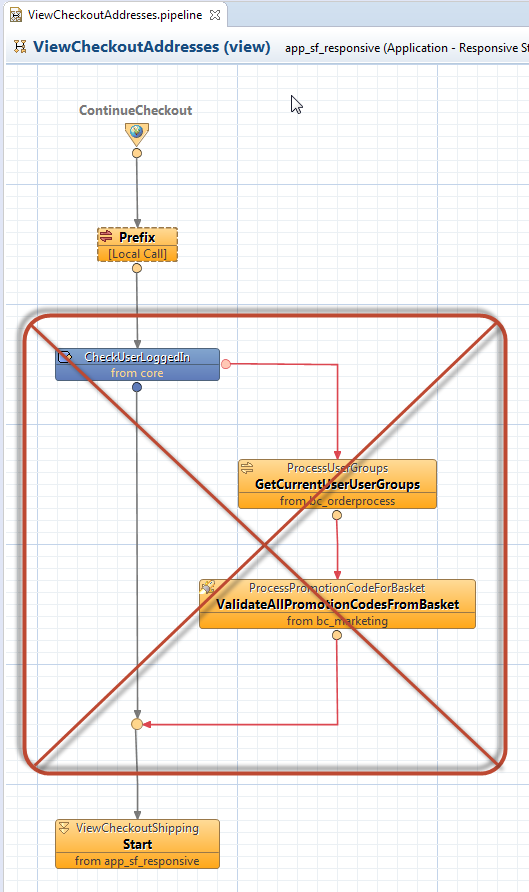 There are several pipelines ViewCheckoutReview-SubmitOrder that are called when the basket is submitted to create an order. All these pipelines are strongly affected by the Order Creation rework and contain a legacy toggle which allows customers to decide if they want to use the complete new, reworked functionality to create an order or the old pipeline-based solution. These pipelines still call the deprecated pipeline for the promotion validation in case the order creation is in legacy mode. Otherwise the promotion validation is implicitly called using validation handlers call from the order creation handler chain.

Validate a Promotion Code During Redemption

Customers who want to restore the old pipeline have to: