Ansible4IOM is a tool of the Intershop Order Management (IOM) for automated server configuration management. Additionally, operational tasks are predefined in operational processes which can be customized by using hooks.

This document describes the general concepts of Ansible4IOM.

Ansible4IOM is a ready to use set of roles, processes and modules based on Ansible. Additionally, it comes along with a customization concept to adapt predefined roles and concepts to your projects and infrastructure.

In order to use Ansible4IOM you should get an overview about Ansible, especially about:

Before running any processes, the client machines (the machines where you want to install IOM), have to be prepared according the documentation at Ansible Install Guide.

Ansible4IOM provides a set of roles, modules and processes. Content delivered with Ansible4IOM must not be modified. Instead, create configuration repositories for all your IOM installations, which are used to configure roles and processes to your needs. Processes provided by Ansible4IOM can be used to install and reconfigure simple PostgreSQL-servers suitable for IOM. You can install, update and reconfigure IOM installations and load-balancers. The Reference - Ansible4IOM Processes is part of this documentation. 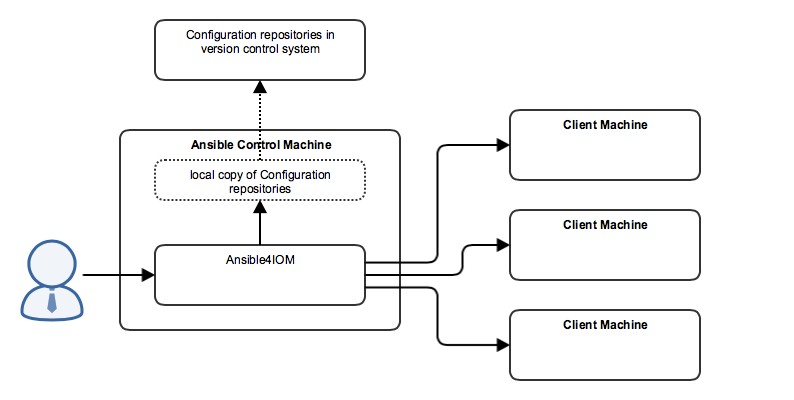 This concept is also reflected on the command line. You have to tell Ansible where to find roles and modules (in variables ANSIBLE_LIBRARY and ANSIBLE_ROLES_PATH, there are different ways to this, see Ansible documentation (http://docs.ansible.com/ansible). You also have to pass the process to be executed on the command line (setup_oms_node in the example below) and you have to pass the path to the inventory file, which is central part of the configuration repository. The command line does not contain any information about client machines, where IOM should be installed. This information is taken from the configuration repository.

Assignment of Machines to Groups

The predefined processes (Reference - Ansible4IOM Processes) are delivered with Ansible4IOM are working on predefined groups. That means, the processes do not know anything about your machines. To give a machine a purpose, you have to assign it to a group within the inventory file.

The following groups are supported by Ansible4IOM:

A machine can be assigned to different groups. E.g., if you want to install PostgreSQL-server and a standalone Installation of IOM on a single machine, you have to assign the machine to both groups.

inventory file: assignment of a machine to different groups

Hooks, described below, are a sophisticated way to customize processes. Additionally the behavior of processes can be simply customized by various variables, which you have to set in your configuration repository.

Processes do not provide any variables by themselves. Processes are built from roles (see Ansible4IOM/roles), and these roles provide configuration options via variables. In general Ansible4IOM is compliant with repositories described in Ansible Best Practices. You can use inventory-, group- and host-files to set variables for a whole installation, for a special server-group or a single host only.

There are two sources of information about variables available to configure IOM processes:

Besides the roles/<role_type>_config/defaults pattern, there is no sharing of variables between roles. Whenever a variable of a role has to be set from a value defined in another role, this dependency will always be handled inside the process.

The following box shows an example. Role omsdb_initialization uses its local variables OMSDB_* for configuration, which are initialized by variables defined in oms_config.

On the other side, variables are not shared between groups. E.g., if you setup a PostgreSQL-server (group pg_server) and an IOM installation (group oms_cluster_node), information about PostgreSQL-host and -port are not automatically available for different processes acting on different groups (e.g., Process - Setup Postgres Server and Process - Setup OMS Node). This makes it possible to run processes separately. E.g., if you use a high-availability PostgreSQL-Server setup by your own or used as a service, you can simply configure Process - Setup OMS Node to use this database.

More information are available in the process descriptions, accessible on Reference - Ansible4IOM Processes.

Hooks as part of the configuration repository are an idea introduced with Ansible4IOM. For this reason you will not find any information about it in the Ansible Documentation. It is explained in detail below.

Hooks are custom Ansible code snippets, which are part of your configuration repository, to be executed at specific points of processes. This way you can customize your IOM installations much more than it would be possible with variables only. Of course, the same result can be achieved by modifying roles and processes provided by Ansible4IOM. If you choose this way though, more than one disadvantage would be the result:

The following example shows a hook, which changes the access-rights to a PostgreSQL-server. Normally only named users from named client machines knowing the required password are able to access the PostgreSQL-server. When you setup a CI-system or other type of non-productive IOM system, developers should be able to access the database of such systems easily. The default roles and processes setting up the PostgreSQL-server do not provide any variables that can be used to configure an open or a secured database-server. The only way to change the according configuration file is implementing a hook.

The most important purpose of hooks is customizing IOM for a special project. Such a project might contain custom code, custom files, and custom SQL-configurations, which have to be integrated in a special way into the IOM standard product. Every developer of this project needs an own IOM installation, running the project code. There are CI-systems, test-systems and of course production systems, which all need this special project configuration.

Therefore, there are many installations that require identical project setup. Nevertheless all installations will also have specific configurations. E.g., the hook from the example above, which opens the database for a whole network, must only be executed on CI systems.

To solve this problem, Ansible4IOM extends the directory layout of configuration repositories this way:

Additionally host-specific hooks are supported, which have to be stored to host_hooks/<hostname> inside the installation directory.

Having a look at the directory structure above, you will find file directories in parallel to hook directories. These are extensions of Ansible4IOM too, intended to enable adding of custom files to configuration repositories too. You should never use this feature to store your project files in these directories. Your projects should be provided packed and versioned by some kind of binary repository.

The file directories should only contain files that are required to customize your infrastructure. A good example for such files are public keys, which you have to install by your hooks.